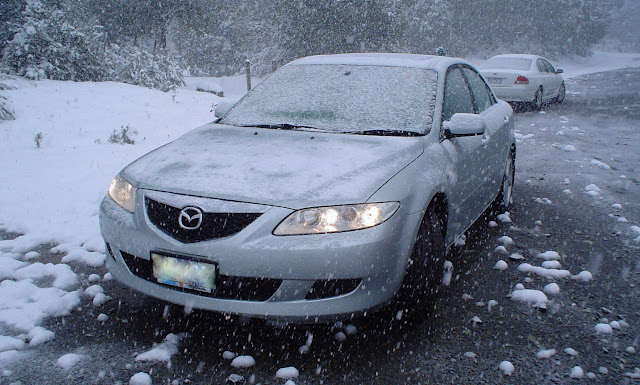 If you are looking for an unbiased review on a used family car, I suggest that you leave this page immediately. For this is a review of a car that is quite close to my heart, my dad's 2003 Mazda 6 Luxury sedan. This is the first car I ever drove, and the a car I regularly borrowed when I had just passed my license test. Even once I've had my own car, I have borrowed the Mazda on multiple occasions, either for holidays not suitable for my then current transportation or just because I wanted a spin in my first automotive love. I've been thinking about writing this review for quite some time, but I was waiting for the timing to be right. Having recently spent a whole week driving this car according to my usual routine, reminding me all of the car's joys and shortfalls alike it feels like that right time is now.

Before I get all emotional about the great times I've shared with this car, let's start with a few facts. On the face of it, the first-generation Mazda 6 is a regular mid-sized front-wheel-drive four cylinder family sedan. Its 2.3L four is coupled to a four-speed automatic gearbox with optional manual selection. Mazda offered a Limited entry level model, mid-range Classic, Luxury, and Luxury Sports Hatch model (which differed from the Luxury hatch only by its ostentatious body-kit and the option of a manual gearbox). The Luxury stood out from its from other mid-sized sedans at its price-point by its generous standard equipment. Included in the $40,270 RRP was leather seats (including electric driver's seat), cruise control, a sunroof, fully automatic climate control, and an impressive six-speaker Bose sound system with in-dash six-disc CD stacker and a small subwoofer mounted on the parcel shelf. I had forgotten just how good that Bose system was until I first hit play on an album during my week driving the Mazda. It makes the sound system in my base-model Focus look like my iPhone playing through its tinny external speaker by comparison. 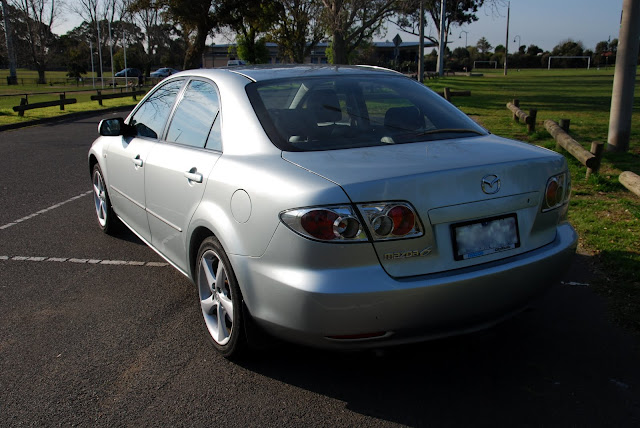 The Mazda 6 revolutionised the mid-sized segment by offering a car that was actually fun to drive, yet also offered good interior space and and more boot space than a Holden Commodore. This car really shows its best on the open road, and the more corners the better. I have driven this car on some of Victoria's twistiest country roads, including no less than five crossings of the Black Spur, as well as a good few kilometres traversing the Grampians in the state's west. The Mazda 6 feels solid and steady into corners, with direct and communicative steering that is perfectly matched to a stiff chassis and a suspension tune that leans towards the firm and sporty end of things. While I would prefer a manual, the auto transmission reminds me that fun can be had driving an automatic, even a four speed! While not lightening quick in its changes, shifts are predictable and can be managed with measured pokes of the accelerator during spirited driving. The engine is more than happy to rev hard, and gives its best when kept in the upper half of the rev-range. The car's brake pedal is firm and responsive, and connects to a  capable set of four disk brakes. Around town however, the 6 becomes a sedate executive sedan: happy with stop start traffic and eager to soak up potholes. To give you an idea of the car's compliant ride, it coped better with the jolting speed bumps of the university car park significantly better than my Focus, despite the Focus' softer suspension tune and five fewer years of suspension wear. 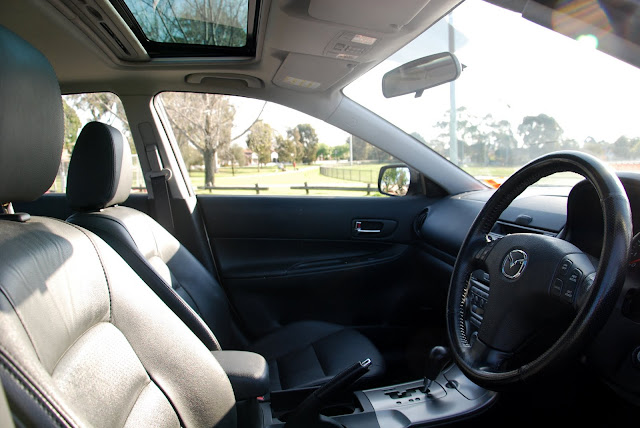 Before you accept either the Mazda's perfection or my own insanity, I should mention that this is not a car without a few shortcomings. In order to provide a class-leading set of features, Mazda had to cut corners somewhere. I particular, some of the interior details leave a bit to be desired. While the dashboard is constructed of a high-quality soft-touch material, the doors are covered in two different hard plastics, with the variety filling the insert space adding a tacky shiny appearance to its list of flaws. The vinyl used on the seat backs screams cost-cutting, and would not fool anyone that it belongs beside the leather covering the rest of the seats. Another minor complaint is the low quality paint visible around the boot opening, giving the impression that this is a less-than-premium car. Meanwhile, its requirement for premium fuel results a similarly premium expense at the pump. Also, after eight years of use the doors don't move as smoothly as they once did. While it is difficult to fault the car on the driving front, tire noise at highway speeds can somewhat sour longer drives. 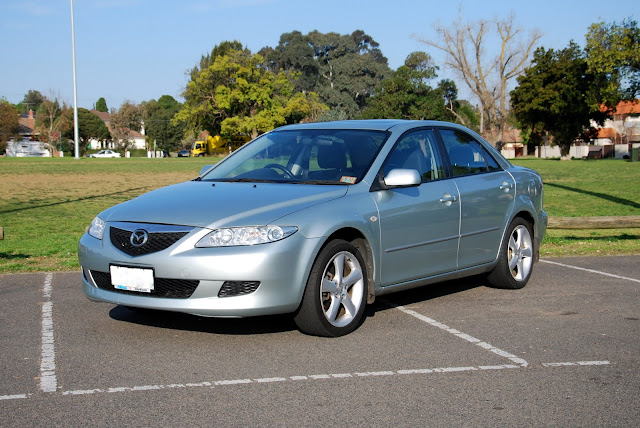 While the two cars are very different in market and concept, it is hard for me to avoid comparing the Mazda to my Ford Focus (yes, I know I've done it twice already). On most counts, the Mazda comes out ahead. Despite the age difference this is not surprising given that the 2003 Mazda 6 Luxury retailed for double the price of my 2008 Ford Focus CL. However, and putting my transmission preferences aside for a moment, the one place I would prefer to drive my Focus would be on a twisty dirt road. Having driven both cars on gravel, the Focus wins for fun-factor thanks to its short wheelbase and suspension that gives a hint of the Focus' rally connections. From a driver's perspective however, I can't help but feel a little jealousy towards the Mazda's direct steering, generous grip and high-speed confidence.

While I could conclude this review by recommending all of you to go out and buy a used Mazda 6, this is a review of just one example. Compared to the average vehicle available for sale, this is a one-owner car that has been well serviced and loved, and sports a below-average odometer reading at just a shade over 100,000km. However, if I were in the market for an eight-year-old mid-sized sedan, I know the Mazda 6 would make my shortlist.