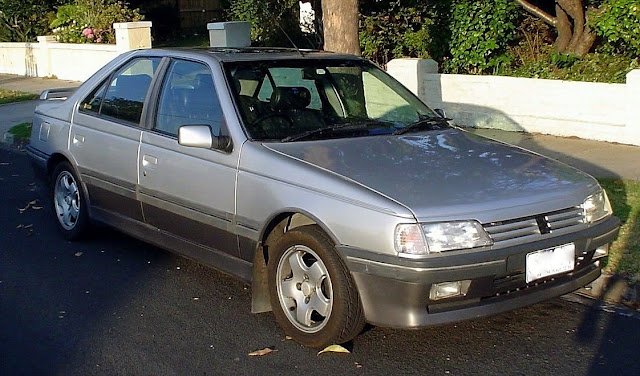 Everyone's first car has a special place in their heart, and for those of us with a passion for cars this effect is amplified. This was mine: a 1990 Peugeot 405 Mi16. I was with great restraint that had I held off buying my first car for nearly six months after I'd passed my license test, although finances (or more accurately, lack thereof) also played a substantial part. Having just scraped together just enough money for a car that might be worth owning, I trawled online car advertisements for weeks looking for the right vehicle. My list of criteria was short (ABS, somewhat economical to run, a touch of class) although armed with limited resources, this substantially limited my choices, especially given that I refused to own a family sedan of the Australian-built variety. Before buying the Peugeot I had test-driven five cars, all Saabs. Two GM 900s and three 9000s. The better of the two 900s I had bid for on ebay, but it sold above my budget, while the best of the 9000s made me desperately wish I had an extra thousand dollars at my disposal. All the rest were pretty much rubbish. So, when I this 405 Mi16 came on the market I was hoping to find better value within its French sheet-metal. I had a soft spot for Peugeots, and I had been reliably informed that the Mi16 was the only first-gen 405 worth owning. 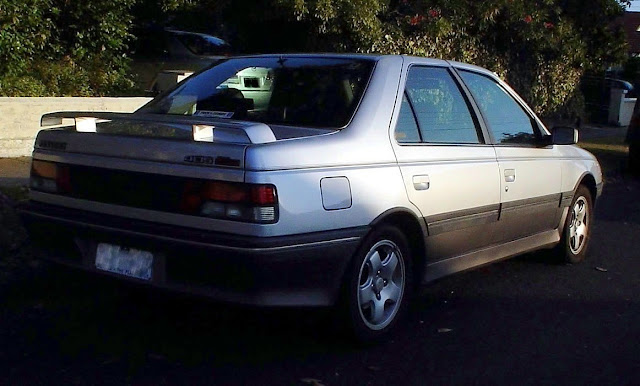 Getting behind the wheel for the first time for a test drive, it was love at first steer. The amount of pleasure I was experiencing from the car's direct, flat steering could only be described by the massive grin on my face. At that moment, I knew I had to own that car. Some negotiations followed to squeeze it into my budget, and I returned home with that grin still firmly plastered to my face.
The car's taut suspension set-up, competent chassis and slim weight (at least by today's standards) were its best qualities, although its 1.9L twin-cam fuel injected engine came in a close second for fun factor (although not outright power). Happily revving all the way to its 7500rpm redline, any harshness expected from a four-cylinder was muffled by throbs of French emotion that the engine liberally ejected. I wasn't particularly quick, but thanks to its engine it felt fast and was an awful lot of fun to get up to speed.
Sadly, my French love-affair ended after just five short months when my inexperienced hands took a u-turn too fast and ended up planting the Peugeot's front end into a rendered brick fence. Fixing it would've cost twice the car's value, and so its life ended there. I sold what remained to a Peugeot 205 owner who wanted it for its engine.
In those five short months, admittedly the 405 had been far from an owner's dream. Less than a week after taking possession, the check engine light started coming on intermittently fixed only by an expensive trip to a Peugeot dealer and a new knock sensor. If stalled, the engine required a fifteen minute time-out before starting again. Coupled with a clutch that seemed to vary its take-up position depending on temperature, this once left me stranded at traffic lights at a busy intersection during evening peak-hour. The day I crashed, I had only just picked it up from spending three weeks at the mechanic while a mysterious intermittent fault with the car's cooling fan was laboriously investigated. 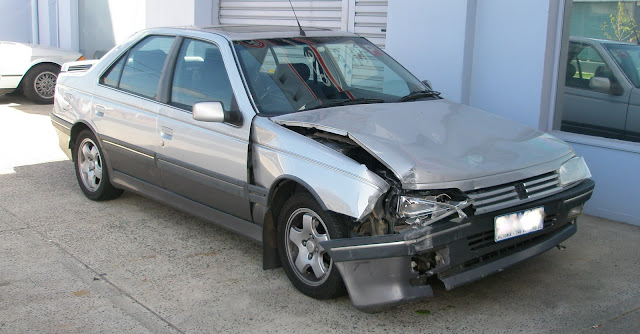 And yet, despite all of its shortcomings, I can't help but remember this car fondly. I'm sure part of that is a result of how much of an involving drive it was compared to my next set of wheels (a Saab 9000CS), but more on that some other time.