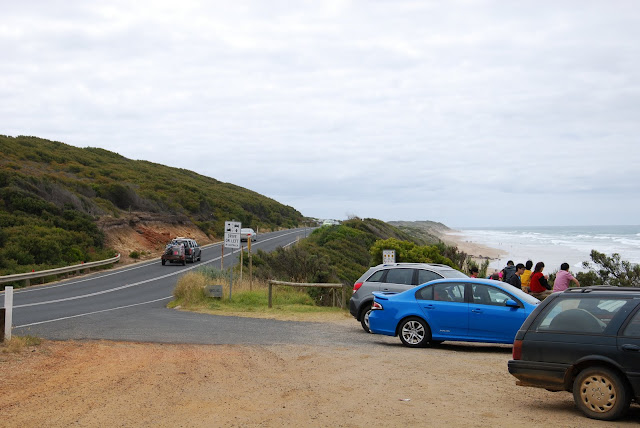 The Great Ocean Road, running along Victoria's Surf Coast, is arguably the state's most famous stretch of road. Combining stunning ocean scenery with a seemingly endless series of twists and turns, with many stretches of the road cut into the side of spectacular cliff-faces, the road is certainly like no other in Australia. And yet, in my seven years of driving since passing my learner's permit test I had not yet driven the Great Ocean Road. And so earlier this year, when memories of 2010 were still fresh in my mind, I set off with my Focus to drive the GOR for the first time. 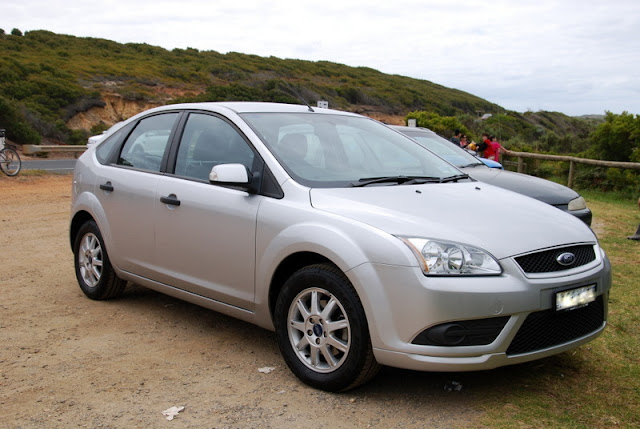 My plan was to head first from Melbourne through Geelong, and meet the Great Ocean Road near its easterly end, close to Anglesea. From there I would head west along the coast as far as Apollo Bay, traversing the majority of the Great Ocean Road in the process. I planned to camp just north of Apollo Bay in the vast green expanse that is the Otways, and from there I could explore the Otways and also give my mountain bike some much needed use in nearby Forest.

I knew that early January was hardly the quietest time of year to travel, yet I don't think I truly anticipated the extent that holiday traffic would fill the roads and towns of the Surf Coast. The journey as far as Geelong was no slower than expected for the time of year, and travelling on the Geelong bypass feels like pure bliss compared to my memories of a twenty minute crawl through central Geelong that was once a necessity of travel to anywhere in western Victoria. However, delays due to roadworks for the completion of the bypass at its southern end were only a sign of thing to come. Only when I reached Anglesea and traffic slowed to a crawl did I realise the extent of the holiday traffic. Admittedly, traffic in Anglesea was probably to be expected. It is one of the closest seaside holiday destinations to Melbourne and would be expected to be well populated at the peak of the summer season. However, I was soon out of Anglesea and finally on the 'proper' Great Ocean Road. Despite sharing the road, and its 80km/h speed limit, with plenty of others, at least I was moving, and least now there was a view. I think the combination of vast blue sun-bathed ocean with a rugged rural coastline could just about make even the dullest road worth driving. And it is no doubt the views and sights of the road that bring most of the tourists there. The Great Ocean Road announces its tourist road status with 'Drive on Left' signs placed at regular intervals together directional arrows painted on the road, something I'd not seen before. As I passed through Airley's Inlet, and past the spectacular cliff-top houses near Fairhaven, I was almost convinced that the traffic would thin out completely at any moment. Instead, about a kilometre out of Lorne, to my complete shock, I hit gridlock. Even after the traffic in Anglesea, that was quite unexpected.

Fast forward twenty minutes and I was finally on my way out of Lorne. I had originally planned to stop for lunch at Lorne, but the traffic and crowds had put me off so much that I could't wait to get through the seaside metropolis. So instead, I continued along the coast, searching for a quite place to stop. Having failed to find anywhere that looked both appealing and unpolpulated, I decided to take a detour off the main road. Turning off at Kennett River, I took the unsealed Grey River Road to the the Grey River Picnic Area. One of my main goals of the trip had been to enjoy driving the Great Ocean Road, yet I found the most fun driving as soon as I turned away from the coast. Grey River Road is a well-maintained double width gravel road that twists its way up into hills lined with thick forest. And in contrast to all of the day's driving so far, there was no traffic. This was the perfect opportunity to keep the revs high and the gears low and throw the nimble Focus from corner to corner.


After lunch I headed back to the Great Ocean Road, and towards Apollo Bay. For a few brief sections the traffic cleared enough that I could judge each corner on its own merits rather than on how slowly the car in fron was travelling. After stocking up on supplies in Apollo Bay I headed north along the Forest-Apollo Bay Road. Finally, as I neared the end of the day's journey here was a great stretch of twisty bitumen shared with just a few other vehicles. Winding up into the hills of the Otways, the road offers plenty of variation: straights and turns, rises and falls, the perfectly engaging drivers road. This was the type of driving I had come to the Otways for. Turning off the main road, after a short drive down a narrow dirt road I reached the Stevenson's Falls camping area, which I was relieved to find at less than half its capacity. There I selected a site and set up my tent: my home for the next three nights. Despite sharing the campground with quite a few other campers, there was just a real peace to the place, a peace that can only be found far away from the city, far from the strains of noise and traffic and busy-ness. And after a full year of study followed by a month and a half filled with work and other such things, this was exactly the sort of restful place that I needed to be.