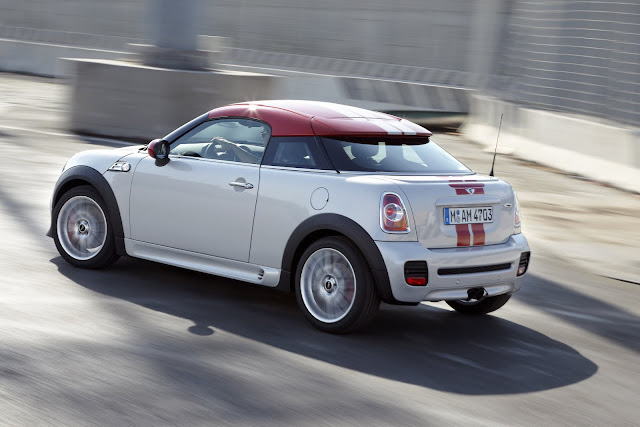 Can you say Mini Cooper Coupe ten times fast? You'd better get practising if you want a slice of Mini's newest additional to its ever-expanding line-up. Or if you want one with a longer name, you could go for the Mini John Cooper Works Coupe pictured here. Expected in Australia later this year, the Coupe chops two rear seats and a bit of rear roof from the standard Mini to turn it into a three-box sports coupe. I can't quite decide whether I like the design of the roof or not, but it certainly fits the brand's quirky young image. Expect to see the Coupe in Cooper, Cooper S and John Cooper Works guises, as well as possibly the diesel version on Australian shores, with engines just slightly updated versions of those found in other Mini variants. 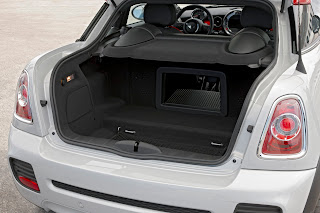 Now if you thought that a coupe would have a traditional sedan-style bootlid (like my favourite pocket two-door, the BMW 1-Series Coupe), you would be wrong. While the Mini Coupe certainly looks like a traditional coupe, its stumpy rear-end actually hides a hatchback for easy load access. While certainly a feature, I do question how useful this really is, especially given there are no rear seats to fold. Thanks to the lack of rear seats the Mini Coupe does gain quite a reasonable boot, however comparing it to a standard Mini with the rear seats folded would no doubt be less favourable to the Coupe.


Like almost all other Minis (AWD Countryman excluded) the Coupe is a wrong-wheel-drive affair (that's front-wheel-drive for the uninitiated). However, the Mini has remained the dynamic benchmark in front-wheel-drive, and would certainly be my first choice of front-driven vehicle to take for a long spin on some twisty blacktop.

While Australian pricing is yet to be announced, expect to pay a small premium for the Coupe over its hatchback sibling. On paper, that seems a little ridiculous given that the coupe has less seats, less roof and less practicality, yet I know there will be plenty of people willing to part with a little more of their hard-earned to get a little more sportiness and a little more exclusivity.

By hcwd July 02, 2012
It has been quite a while since I last posted anything here. To be precise (I do like to be), it has been exactly 284 days since my last post.  Since then many things have kept me from posting, and with every week that passes it has only become harder to give any attention to HaveCar WillDrive. But this week I have come down with such a terrible bout of car lust that I couldn't help but share it here. Yes, I am lusting badly for an Audi A1 Sportback. You may be asking yourself "what could be so exciting about a tarted-up overpriced Volkswagen Polo?" At first glance you may have a point, but let me explain.
8 comments
Read more

By hcwd March 13, 2011
Everyone's first car has a special place in their heart, and for those of us with a passion for cars this effect is amplified. This was mine: a 1990 Peugeot 405 Mi16. I was with great restraint that had I held off buying my first car for nearly six months after I'd passed my license test, although finances (or more accurately, lack thereof) also played a substantial part. Having just scraped together just enough money for a car that might be worth owning, I trawled online car advertisements for weeks looking for the right vehicle. My list of criteria was short (ABS, somewhat economical to run, a touch of class) although armed with limited resources, this substantially limited my choices, especially given that I refused to own a family sedan of the Australian-built variety. Before buying the Peugeot I had test-driven five cars, all Saabs. Two GM 900s and three 9000s. The better of the two 900s I had bid for on ebay, but it sold above my budget, while the best of the 9000s made m
2 comments
Read more