I've long had a soft spot for the Jaguar XJ. In particular, I'm quite drawn to the elegance of the X300/X308 models, sold here from the mid 1990s through to the early 2000s. In fact, not long before I purchased my Focus I was seriously tempted by a 1997 XJ6 that was for sale by a local Jaguar specialist for a shade under $16,000. At the time however, a fear of ongoing maintenance costs and a reluctant preferance for optimum practicality won out over my desire for a piece of not-so-distant British luxury automotive history.

The X300 was based heavily on the XJ81 that it replaced, but sported a fresh new body style. The new styling left the previous model's boxy lines behind in favour of a design that harked back to the original XJ's style, mixed with a healthy dose of sleek modern lines. The result was both sleek and elegant, and seemed to get the retro formula just right. Launching in 1994, the X300 was initially sold as an XJ6 with a choice of 3.2L and 4.0L straight six engines, as well as an XJR model featuring a supercharged version of the 4.0L six. The updated X308 reached Australian shores in October 1997. The new model was almost indistinguishable on the outside from the model it replaced, but offered an updated interior and new engines together with a host of minor improvements. The new engines replaced the 3.2L and 4.0L sixes with V8 engines of identical capacity, including the superchaged engine of the XJR. The new engines brought with them new model designations: XJ8 appropriately replaced the XJ6 moniker. The X308 was sold through until 2003, when it was replaced by the all-new aluminium X350.

If you are struggling to understand my affection for this particular generation of XJ, let me try to explain. When these cars were new I admired them as the optimum large luxury sedan. The body lines of the X300/X308 XJ evokes a prestige and stature that are unmatched by its German competition. It is long and wide but not high off the ground. Its bootlid appears alomost as long as its bonnet, and the cabin roofline is barely longer. There is somehing about the car's street stance that suggests to any passer by that it is about to return to its home at a British country estate as soon as it finishes mingling with the commoners. 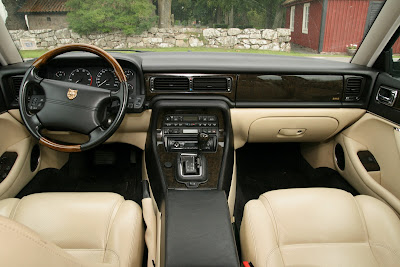 The XJ's interior is one of its biggest atractions for me. There are no hard-touch grey plastics here. Instead there are many cows worth of leather complemented with a few trees worth of wood, probably havested from a private forest on an XJ owner's vast country estate. The backseat is spacious (at least in the long wheelbase) and comfortable enough to be a place you would want to spend many hours, and th quality of comfort and materials in the backseat is just as good as those in front.

These XJs are proper luxury cars for proper upper-class people. While I am most certainly not a proper upper class person, I find it difficult to resist the allure of the XJ's ideals. It speaks of restrained but clear prestige and uncompromised passenger luxury, without the overcomplexity of the gadget-laden luxury cars available today. Adding to that very appealing prices now even for the later X308, I can't quite convince myself that there isn't an XJ out there somewhere with my name on it.

By hcwd July 02, 2012
It has been quite a while since I last posted anything here. To be precise (I do like to be), it has been exactly 284 days since my last post.  Since then many things have kept me from posting, and with every week that passes it has only become harder to give any attention to HaveCar WillDrive. But this week I have come down with such a terrible bout of car lust that I couldn't help but share it here. Yes, I am lusting badly for an Audi A1 Sportback. You may be asking yourself "what could be so exciting about a tarted-up overpriced Volkswagen Polo?" At first glance you may have a point, but let me explain.
8 comments
Read more

By hcwd June 01, 2011
Porsche 911 GT1-98 at AIMS 2010 in Sydney I love a good motor show. Since a young age, the journey to the Melbourne Motor Show has been an annual ritual. Until last year that is. For the first time in my lifetime, there was no motor show in Melbourne for 2010. Thanks to a new agreement between the organisers of the respective shows in Melbourne and Sydney, a show would occur in each city in alternating years. This came after industry pressure for a single show shared between the two cities, and struggles experienced by organisers of shows in lesser Australian cities. But was this enough to save the motor show from the jaws of the internet generation? Or are high-cost events that seem to cater to an increasingly niche audience headed for extinction?
Post a Comment
Read more