Things I Like About My Ford Focus: Space Versatility 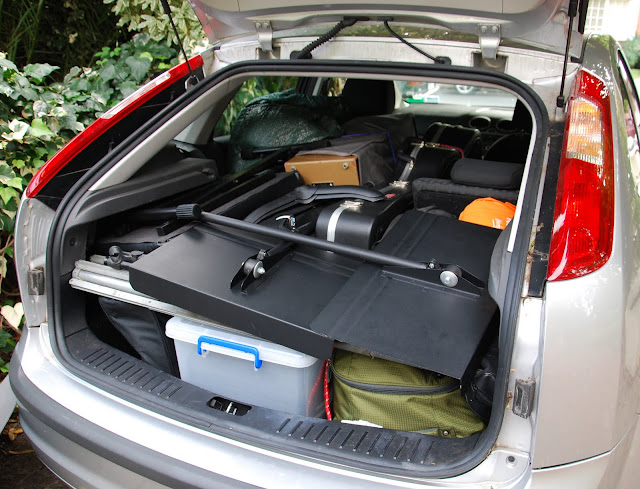 Every car is a compromise. Generally, size is traded off against fuel economy and weight, and practicality against driver enjoyment. When I bought my Ford Focus, one of the main priorities was fuel economy. However, I also periodically find myself wanting to transport a reasonable amount of cargo, and so the obvious solution was a hatchback, giving me good load access and the ability to fold the seats down for a large cargo space. Last weekend I headed to Phillip Island for the weekend, and took with me a collection of musical equipment plus a few personal items. As you can see in the photo above, with two of its rear seat folded the Focus swallowed up everything I could possibly need, while leaving room for two (admittedly non-existant) passengers.
I am also into a bit of cycling and own both a road bike and a mountain bike. While I do own a clip-on bike rack, there's nothing like the convenience of flipping the rear seats flat and chucking the bike in the back either whole (road bike) or after removing the quick-release front wheel (mountain bike), making countless beautiful bike rides only a short drive away. Compared to similar sized hatchbacks, the Focus has a slightly longer boot area thanks to its swooping styling, which also results in better cargo access compared to hatch with a more vertical tailgate like the Mazda3. Personally, I also like this style of a more fastback-like design, but given the rarity of this style in today's hatchbacks, clearly many automotive designers disagree. I pleased to see that Ford has retained this style in the upcoming new Focus.
I often long after cars that are smaller, or sportier or just simply less versatile in their load lugging abilities (such as my recently mentioned BMW 135i), but every time I pack my focus to the brim for a weekend away, or effortlessly throw my mountain bike in the back for a long day of riding I am reminded that unless my needs for cargo-carrying reduce I should always own a vehicle with at least as much load space as my Focus.