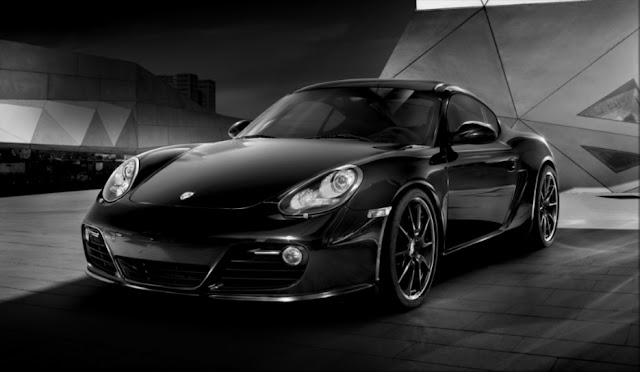 In my ideal garage, sitting alongside my daily-driven BMW 135i would be a Porsche Cayman S. Offering the purity of a mid-engined rear drive two seater sports car, the Cayman S has an appeal that to me that its front-enginged competitors simply cannot offer. Although to me part of attraction of the Cayman S is a degree of less-is-more philosophy, the recent announcement of the release of the Cayman S Black Edition sporting more power and more features than the standard S still caught my attention.
Power is up 7kw on the S to 243kw, a healthy output for the car's 3.4L flat six, while torque remains unchanged. The extra power gives the Cayman S Black Edition a 0.1 second advantage over the S in a 0-100km/h sprint, now 5.1secs with the six speed manual or 5.0secs if you tick the option box for the seven-speed PDK gearbox. Option the Sport Chrono Package with the PDK and that time comes down even further to 4.8secs using Launch Control.
Extra equipment included as standard on the Black Edition includes a set of black 19-inch wheels from the Boxster Spyder, as well as Bi-Xenon headlights with dynamic cornering lights and other niceties such rain-sensing side mirrors and an automatic anti-dazzle interior. Plus, the car has the requesite minor touches that would be expected of a special edition from Stuttgart, including Porsche crests in the seat headrests and Black Edition scuff plates in the door openings. Unsuprisingly only one colour is available, I will leave you to work out what that might be.
The best part about the whole package is the price. While hardly affordable to most (myself unfortunately included) at $147,500, it costs not a single dollar more than the standard Cayman S. However, only 500 will be build worldwide, so expect the Cayman S Black Edition to be a rare sight on Australian roads.